Here are my thoughts on Star Trek Into Darkness which I just saw this afternoon. (I know, I’m late to the party)

I predicted that I’d enjoy it but that I’d find parts problematic. This is exactly what happened. 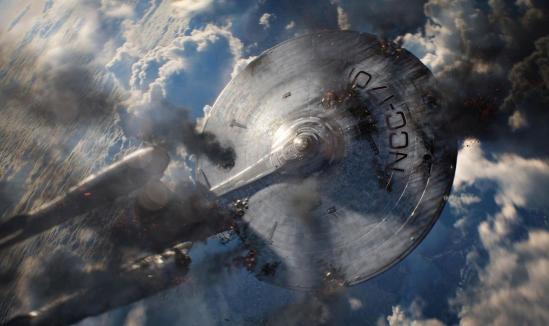 There are some aspects of J.J. Abrams interpretation that can only be described as “masterful”. There are areas where he entirely captured what Star Trek is. Beyond the look and feel, which were utterly flawless, the parts that captured the essence and spirit of Star Trek were fleeting. And some areas, entirely missed.

The Klingons. The Klingons were great. Their ships were perfect and they had their own style while still looking like Klingons. Perfect amalgam of new and classic. Which goes for most of the style of the film as well. 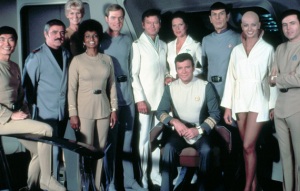 Everything is so grey, boring, and uninspired. Just the way we like it.

Speaking of… the dress uniforms. So the regular militaristic grey ones were appeared to be boring and uninspired at first glance BUT when you see the Admirals’ grey and white dress uniforms, it’s clear that it’s nod to The Motion Picture.

It’s worth noting that pretty much everything about the look and feel, especially the changes, is done with the utmost respect to the source material. In spite of everything being absolutely modernized, it still looks like Star Trek (which is more than I can say about Enterprise).

I liked how they plugged some of the plot holes from the first film. Trans-warp drive would revolutionize space travel and change the course of history? Great. It’s classified.

I especially liked the misdirection in the trailers. No, they didn’t crash the Enterprise. No, the plot was far more convoluted (though still predictable) than Khan out for boring revenge against Earth. The political overtones of using Kirk to start a war with the Klingons, that was great.

The best moment, for me, was when they were on the shuttle heading to the Enterprise, and Krik McCoy, and Spock are debating ethics. THAT is pure Star Trek. Some episodes of the original series comprised of little else than the three of them deliberating on what course of action they should take. And Spock’s comment on name-calling in debates is priceless. It was these moments that mixed humour and levity with serious ethical dilemmas that really convinced me that I was watching a Star Trek film.

Which brings me to…

What the hell was up with Carol Marcus? Ok. So a brainy tough woman who kicks a moderate amount of butt is certainly welcome on the Enterprise. And she nearly accomplished this… except while everybody else was lovingly crafted replicas of the TOS bridge crew with depth and power, Alice Eve got to play a cardboard cut-out of Naomi Watts circa 2001. It was like watching an actor surrounded by people. And please… was the only reason she was included so that she could appeal to her daddy not to blow up the Enterprise pretty please with sugar on top? Which only worked for about 30 seconds…

Oh right. And she gets to undress in front of Kirk. BECAUSE THAT’S SO IMPORTANT, RIGHT? 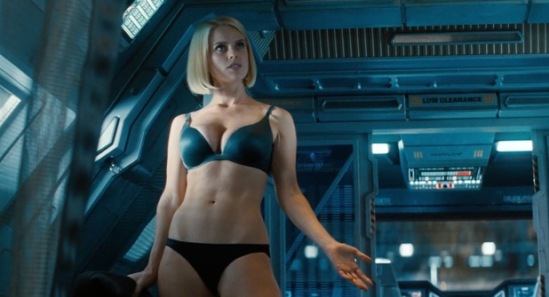 I get that Star Trek is sexy. It always has been and it always will be. And that’s fine, as long as we back up the sexiness with some kind of genuine emotional involvement. Otherwise, it’s just crass. (Or could we at least let Kirk lose his shirt when he gets into a fight so we can at least pretend that there is some kind of gender balance.)

In case you’re not up to speed on the lore, this is the woman who was to be the mother of Kirk’s son. Could she please have a little more depth than this? So much ugh. She really stood out, because everybody else TOTALLY NAILED their characters. (With one other exception) No offence to Alice Eve. She’s talented. But the character did not belong, and she stood out.

While the look and feel was there, the spirit of it was lost. I’d have loved to see more diplomacy and less running. Don’t get me wrong, the action scenes were great. Abrams is brilliant at directing action. The camera motion was clear and you always knew what was going on (glad I saw it in 2D, though, because the opening shot would have made me hurl otherwise). But it really seemed that action was the only way to resolve conflicts, and while there was a small amount of mind games and double crossing, there was nowhere near as much deliberation as I’d have loved to see.

I don’t know how I felt about the aliens they were observing initially. It was great to demonstrate exactly why there is a prime directive. But the aliens, while cool looking, seemed a bit too human (read: aboriginal). It struck me as mostly tasteful, so I think they got away with this, but I get the sinking feeling that I missed a layer. 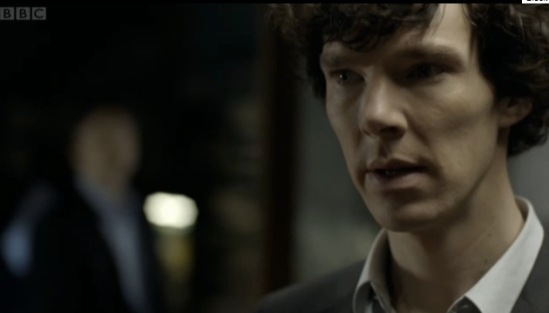 God I love that man… but not as Khan. My concerns over Cumberbatch’s whiteness in the role where confirmed. I loved every minute of the film up until they reveal his true identity. Seeing a white guy talk about being genetically modified in to a supermench is problematic. If that was the intended message, i.e. look how scary white supremacy is, fine. That’s great. We’ve seen it before. Nazi supervillains are bad, evil is punished, yada yada yada. Except the character of Khan pre-existed specifically as a non-white guy in a way that directly dismantles the trope of the Arian super-race. A non-white ubermench has a powerful message concerning eugenics and the problems with it. That message is lost, and Cumberbatch in this role just reinforces the notion of white superiority. But with an appropriated Sikh sounding name. (*cough* colonial history)

But I can’t blame him for not turning down the role. So let’s ask ourselves. How well did he do in the character?

Disappointing, actually. I thought he was a great villain. His action scenes were bad-ass. His mind games rocked. And his performance was stellar.

But he wasn’t Khan.

Cumberbatch succeeded at being focused and emotional. But he wasn’t intense or passionate. Khan is devoted to his crew and would give his life for theirs. I believed that Cumberbatch would, but out of a sense of duty and doing what he thinks is right. The emotional attachment was there, but the passion wasn’t. Ricardo Montalban has a fiery passion and deep love of his crew that drives him. And a temper. Cumberbatch played it cool. He was caring, which proved an interesting reflection of Spock (who was balancing caring with cool), however Khan has always been a near mirror image of Kirk.

But this has nothing to do with Cumberbatch. He is a fine actor and he did a fantastic job of playing that role. The role he was given, and directed in, however, just wasn’t Khan.

Cumberbatch and Eve are unfairly placed in the same boat. Both of them stood out, and by no fault of their own. I suppose this can be validated by J.J. Abrams recent appearance on the Daily Show in which he admitted that he never really watched Star Trek because he “couldn’t get it”. He’s done a fantastic job of replicating the aspects of it that he can, but I find it shows that he’s missing the spirit of it.

All I can really say in response to that is…