Let me first start off by saying that anybody who claimed the romance between Spock and Uhura that was presented to us in J.J. Abrams‘ feature film adaptation of the series was far fetched and unfitting of the characters need only watch the first twelve minutes of the first episode of the first season to see Uhura flirting shamelessly with Spock. 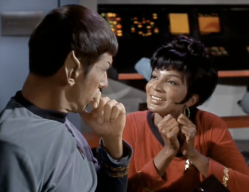 “Why don’t you tell me I’m an attractive young lady, or ask me if I’ve ever been in love?”

Got it? It’s pretty obvious. It wasn’t made up. It’s there. It’s been there from the beginning. Now we can move on.

I suppose it goes without saying that when I first watched these shows as a six year old, it probably went over my head exactly how sexually charged the series was. Especially this episode. There is no way the prepubescent mind would ever grasp the implications of what goes on at “Wrigley’s Pleasure Planet” nor why comparing McCoy’s old flame Nancy Crater to a woman he left behind there would earn Darnell a scolding and a time-out for inappropriateness. The youthful image that Crater —  being some kind of psychic shapeshifter —  projects to Darnell gyrates and rolls her shoulders in a way that exudes sexuality and eroticism. Then she struts away beckoning Darnell to follow. Darnell, of course, follows… to his untimely death. Oh. So that’s why this episode is called The Man Trap.